A sudden shift to the Metaverse, let's look at the pros and cons of it Top Web and Mobile App Development Company

A sudden shift to the Metaverse, let’s look at the pros and cons of it 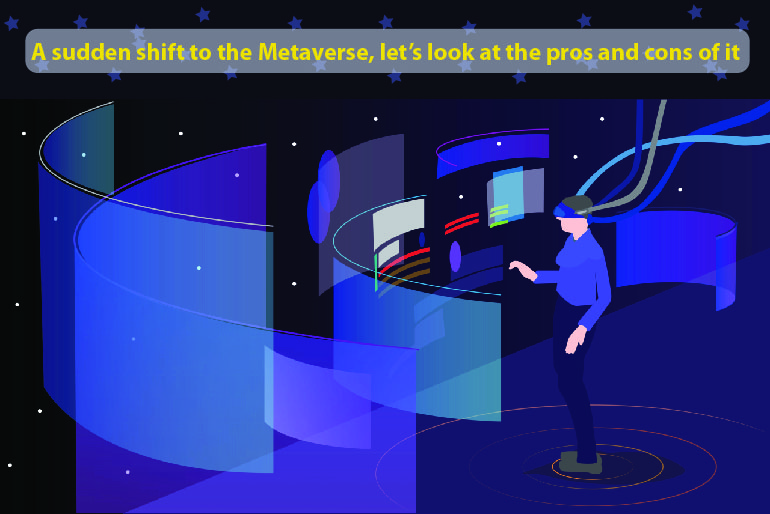 In a seminar CEO Mark Zuckerberg declared Facebook is changing its name to ‘meta”. This choice of name is because of its immense growth is on the metaverse concept. Hence Facebook comes with the name of Metaverse and not as Facebook. You can also check our other solutions like e-commerce solutions, fantasy sports platforms, and many more.

Facebook is famous for its specialized features for communication. It includes digital avatars which help to communicate your feelings with perfect clarity to others. These symbols come with the name MVRS.

REASON BEHIND THE NAME META

In other words, the reason behind the change of name is its new computing platform. The idea of the metaverse comes from a sci-fi novelist. Facebook is a simple and easy-to-use digital interface where people confirmed regret and communicate easily with others.

You can communicate with people without any geographical boundaries at your convenience time and place.

Facebook says that corporate structure and the app Technologies will remain the same after the change.

The word metaverse means “meta-universe” i.e refers to a digital space where the real-world interacts with the virtual. Hence with this platform people can move between different devices and can easily communicate with friends, relatives acquaintances, etc.

This event was on the 28th of October. Facebook acts as the parent app on other apps like Instagram, WhatsApp, Oculus, etc. It has 10000 + employees. This application is sufficient to build consumer hardware stitches AR glasses.

Presently Facebook’s Metaverse is a very popular concept. The dedication of Facebook is noteworthy to promote the idea of Metaverse. But, for too many people this concept is not that much clear. But in simple words Neel Stefansson, a Sci-Fi novelist has given the term “metaverse”.

Besides this, the idea behind this concept is to describe the digital world or the virtual space. Space refers to an area where people are creeping from a dystopian or a real world. Hence, nowadays this idea or concept is largely controversial. But despite many large companies accepting this metaverse concept because of its unique benefits.

EFFECT OF META ON OTHER APPS

Hence all will remain the same and convenient enough for you except the name. Therefore in conclusion Meta is the same as Facebook or are identical. Hence, Facebook’s dedication is noteworthy to building a more efficient technology to connect people.

The main reason behind the change in name is that Zuckerberg’s expectation to not limit Facebook as just social media company.

The new method was Technology is a great focus to the Facebook company. According to experts, it is an important chapter that revolves around the mobile internet. In addition, they also think with this project of metaverse Facebook will double their users and hence their revenue.

Likewise Facebook, many companies have also changed their name. For instance, Google in 2015 was under Alphabet. But in today’s world, you know Google is just not and not a search engine. On contrary, it is a sprawling conglomerate with various other companies. Hence it is like a driverless car and health tech. Furthermore in 2016 Snapchat came as snap Inc. In addition, it also started using the new address of “camera company” because of its spectacles camera glasses. You can visit our web page as Lytechx Digital Pvt Ltd, it’s the best web development company in Jaipur. And may follow our other blogs like The conversion Rate Optimization with the help of the A/B Test.