Cost For Creating a Fantasy Sports App like Dream 11 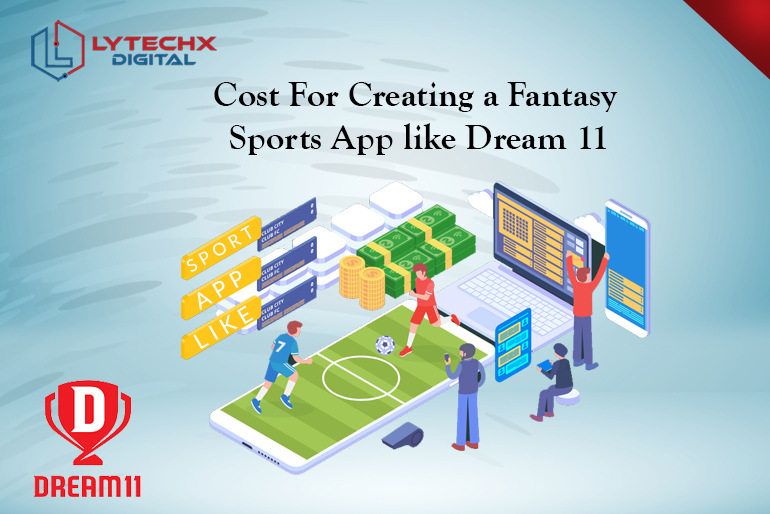 In this era of life, human beings are enclosed in the nutshell of technology. The urge of games and earning money has now become a more voguish and exhilarating activity. People often show a great level of interest in sports like cricket and football but only a few can play in the real field. But now with the emergence of applications like the fantasy sports app, anyone can play and earn through this. Also, you can support your favorite team, make your own team members, and play in a way of your choice to win the game like cricket or football and earn a handful amount of money.

The fantasy sports app is running high in this period of technology. There are many such apps like dream 11, NFL Fantasy Football, Yahoo Fantasy Sports, etc., which help people to play the game available there and earn a profit out of it. But the questions lie in the cost of creating fantasy sports apps which may trigger many people from creating such apps.  The fantasy sc ports apps have gained a high level of popularity because it has a huge range of users. People from all over the world watch cricket, football, and there is a high level of fascination for these apps as individuals get a direct chance to play the game available, in their own way and most importantly earn from the game played by them like cricket and football. Let us now see what is this fantasy sports app like Dream 11, CBS  sports Fantasy is? And the cost of creating such applications.

Advantage of Creating an Application

The fantasy sports apps are a vogue at the time of the Indian Premium League (IPL), One-day internationals (ODIs), The Test matches, etc. So the usage of these apps is worldwide as there are a huge number of sports critics all around the world.  So the basic and foremost advantage of creating such applications can be earning a huge amount of profit as there are an enormous amount of users for these applications. Other than that it may also include the awareness of the brands which are advertising, the rise in the base of the customers, it also helps to get an immense number of traffic in the websites, which in turn makes amazing money for the creators of such fantasy sports apps like Dream 11.

Who Creates These App and How?

The sports fantasy app is not at all easy to make as it seems easy to play. There are many procedures that are followed to make such apps. These fantasy sports applications like Dream 11, yahoo fantasy are created by the best software engineers and web developers. These apps are extremely useful for the individual who are interested in games or sports as they can play their preferred matches there, and also can win an amount from it. These applications are created with JavaScript, HTML, and C++, etc. Programming.

The sports critic who is there all around the world uses these applications like Dream11, NFL Fantasy football, etc. They use the app for playing different types of games available there and also to earn money. So the profit they get is the amount which they win from the game. And also there are many people in this world who loves to participate in the games like cricket, football but they do not get the opportunity to play it in the field. But they do have knowledge about the game, the placements of the players and the rules and regulations of playing the game, etc. So here is a chance for them to explore the field of their talents. With the help of the app, they can play their own game like cricket or football, make their team, and also win the game to get an amount as a reward. One can easily create their account in those apps and play their favorite game without any issues. This also helps them to earn money easily.

Cost of Creating These Apps

Nowadays everything in this world has a very high cost, so before placing any step people should always think of spending an amount on it. Prices of every product and service are increasing day by day. Thus, the price tag that comes with the creation of a web page or a software application is also very high. Normally, for creating an app like the NFL Fantasy football, yahoo fantasy sports leads at an average of 15000 to 20000 dollars.  It may be a huge amount for some but for the seasonal business owners, it isn’t much. There are many things that are included in the creation of the application.  The apps like the Dream 11 the cost of making such an app can be 5000 dollars to 10000 dollars.

Creating an app is isn’t that easy there are many things that go on into the procedures before making an application for something. And there are many companies which create app ls but for that, they take a huge number of amount from their customers. But it isn’t like this with this company. We assure you to give you the best quality services and make the perfect application for you without taking extra charges. Making an app like Dream11 & fantasy App developer and others need a very high amount but with this company, you get the opportunity to have the best application but at a very affordable price. Added to these they include the best Software Engineers and web developers so there is not no question of any kind of trouble regarding anything. So you can easily rely on this company for the creation of your applications.

Thus, it can be easily concluded that the cost of making a fantasy sports app can be huge for some or maybe less for a few. But with the Lytechx Digital Pvt. Ltd, the best software service in Jaipur, you can trust them. As it will make your application with the best web developer and will surely make an affordable price.