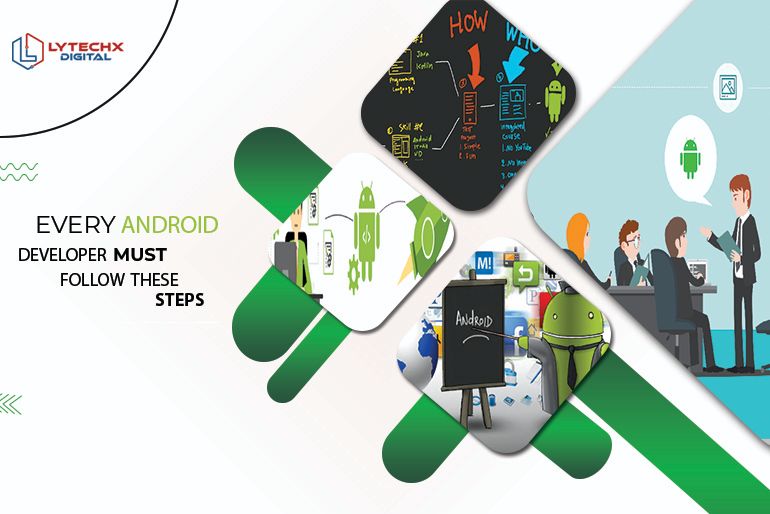 Android development is the process in which applications are created which run on Android-driven devices. Android apps can be written in languages like Kotlin, Java and C++ using the android software development kit (SDK), but using other languages is also possible. Any non-JVM language will need the help of JVM language code that can be supplied by tools with restricted API (Application Programming Interface) support, for example, JavaScript, C, C++. This generation is witnessing a surge in the mobile application development market. Be it social networking, games, media, e-commerce, or be it anything; users always rely on mobile apps. It has led to increasing demand for skilled developers in Android and other platforms too. Companies want high quality and engaging apps to reach a wider audience, gain more visibility, and increase revenue.

On the other hand, users want applications that make daily life easier. Hence, there comes the role of an Android developer who can build new user-friendly apps and improve the existing ones’ performance. One critical advantage of choosing Android as a career option is that as an open-source platform, Android development offers a royalty-free and best technology framework. It gives the freedom of using a wide range of license-free components as per the requirement. One can even edit and extend a source code and practice one’s development skills to build feature-rich apps. Learning Android app development is easy for those who know Core Java. If one can study industry problems and think logically for the solution, one can easily grow his/her career in Android app development.

So here are a few steps to be followed by an Android developer:

The first step is to visit the official website of the Android Developer. To be truthful, it is absolutely important to read the entire website to understand the ecosystem and the variety of solutions, ideas, and technologies linked with Android. One won’t understand or remember everything at once but one will know where to look for in the future. Looking at the website will give quite a clear picture and help in the development of the application.

Google officially had declared Kotlin as a “first-class” language on Android since May 2017. Not many companies still use java in developing apps, thus learning Kotlin is an extremely important step in becoming an Android developer. Kotlin is much more productive and less boilerplate than Java. A class taking 50 lines of code in Java can be written in just one line in Kotlin. Even though currently, almost all apps are in Java, it will gradually change in the upcoming years because Google has declared Kotlin as the official language for Android app development. Many companies have already started using Kotlin for their Android app development, and that is the main reason, Java developers should learn Kotlin in 2021. On the official website mentioned above, one can find the documentation for Android development and try the language online.

Material Design is the most beautiful child of Google and the most important step in an app development process. To apply material design effectively, the following points must be kept in mind, the metaphor of material, bold, graphic and well-chosen elements that add meaning and are pleasing to the eyes and lastly making messages with motions. To get the complete concept and idea of setting up the Material Design, one can look up the official Android Development website.

An integrated development environment (IDE) is a software application providing special facilities to computer programmers for the development of software. IDE is designed to extend productivity by providing closely integrated components with the same user interfaces. It presents a single program where all developments are done. The program then provides many features for authoring, modifying, deploying, compiling, and debugging software. IDE aims to provide the same set of capabilities as one cohesive unit. Minimizing setup time can increase developer’s productivity, especially in cases where learning to use the IDE is faster than manually learning all individual tools. Android Studio is undoubtedly the best IDE for Android and it’s from Google. Other IDEs include Eclipse, Lazarus. SharpDevelop, etc.

Knowing how to write a code is simply the beginning of building an app. The best results come from writing and practicing clean code and documentation. Start by developing an app idea. Search out the problems that people are facing in their everyday life. Note them, and shortlist the one that makes the most sense. And once you have decided, start writing your code.

Staying Up To Date

Being an app developer implies mastering new skills and gaining fresh knowledge all the time. It is hardly possible to be a good developer in today’s fast-developing high-tech world without paying enough attention to learning. This can be considered as the basic responsibility of Android developers. Staying up-to-date and learning new technologies is a very important step in the App Development process.

So, here are the steps every Android Developer must know and follow. The steps are the basics for beginners and will help in the proper learning and knowledge of the person beginning with app development. Mobile technology today is nearly a cut-throat competition. Nurturing one’s skill continuously will surely bring up the best Android career opportunities. The steps above might help one get the required technical knowledge and move ahead on the right career path. The growing demand for new and innovative mobile apps increases the need for trained professionals. So if one can learn and master android development, it is certain that he/she will have a beautiful and secure future. For more information regarding app development, you can always get help from Lytechx Digital Pvt. Ltd, the best web developer in Jaipur.