How might a prototype help you with your mobile app design project? Top Web and Mobile App Development Company

How might a prototype help you With your mobile app design project? 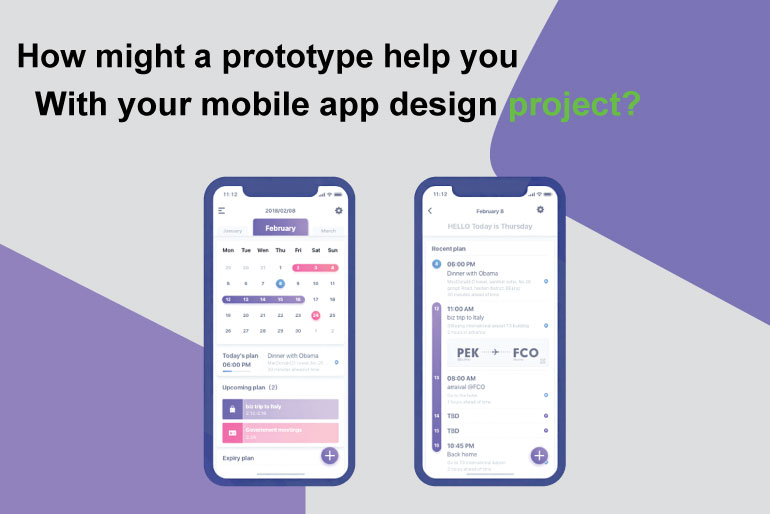 What Is A Prototype For A Mobile App?

A prototype of a mobile app shows how a product will work. Prototyping may be done in a variety of ways, but in mobile app development, a prototype usually begins with sketches or a paper interface and progresses to an interactive model that resembles the final result. A prototype’s objective is to describe a product’s design and navigation flow to enhance development efficiency. Prototyping is a useful activity that allows you to see how the app will work by showcasing user flows and displaying a functional design and layout. A prototype, of course, will have flaws; but, earlier in project development, we find a prototype that permits these errors. You can go for our services like Mobile Application.

Prototyping a mobile device is critical for user-centric design and development. Prototyping is an important aspect of the design thinking research process because it allows for quick iteration to arrive at a solution that provides the most value to the user. Often, prototyping will offer new possibilities and clarify the correct course of action throughout development. Product teams regularly analyze and modify the product idea, returning to the beginning of the process numerous times until the concept matches business objectives and user demands, which is a cyclical activity. Overall, the method aids in identifying and resolving issues early in the project, when making adjustments is significantly less costly.

The Advantages of Prototyping a Mobile App are as follows:

Prototyping a mobile app verifies an early concept and allows for the exploration of fresh concepts early in the development process. User testing can assist uncover possible changes to make before the product is finished during the prototype phase of the design thinking process. A prototype is the product’s base, which is refined over time until the mobile app satisfies corporate objectives and is marketable.

2. Cost-Efficiency is the second factor to consider.

In the long run, starting a project with a mobile app prototype saves money. It is significantly less expensive to fix problems early in the process than it is to wait until the finish.

3. Involvement of clients and stakeholders

It’s good to include the most significant stakeholders in the planning process throughout the prototype phase. Stakeholders should have as much ownership of the project’s design ideas and decisions as feasible. Developers, for example, may find a certain design option appealing, but the notion is technically challenging, and time limitations restrict them from exploring other alternatives. Other stakeholders, on the other hand, may choose to develop other components first, which are more closely aligned with the project’s long-term goal. Perhaps the marketing department has previously conducted market research on a separate group of consumers. When the most important stakeholders are involved in the prototype phase of a project, it gives it a larger perspective and ensures that you’re getting the most out of your time.

4. Validation of the User Experience

Developing a mobile solution that encourages deep user interaction is a challenging undertaking. One of the most effective approaches to assess usability and UX is to put a prototype through a user test.

In this post, we’ll go over some of the great benefits of prototyping a mobile app before starting the development process:

The prototype is increasingly becoming the basis of a product. we change or improve these to fit the project’s demands and objectives. Prototyping for a mobile app, on the other hand, confirms the concept of design. And allows for the exploration of new concepts early in the development phase. User testing may aid in the prototype phase by identifying potential enhancements that can be made before the product is finished. This allows for the resolution of anticipated difficulties throughout the design phase. Perhaps saving your firm money in the long run.

PARTICIPATION IN THE ACTIVE PROCESS

One of the most significant advantages of creating an app prototype is the improved communication between the customer and the design team. Prototyping allows developers to explore new ideas and concepts and exchange feedback with them in this way. Technical concerns may be reviewed in detail when there is active engagement in the project from Designers, Developers, stakeholders, and the client so that the end product can effectively fulfill the user expectation and particular project need.

Prototyping, in general, may assist you with lowering uncertainty and providing a picture of how the final product will seem. It’s a known truth that if you’re putting money in a firm, you’re most likely considering the projected return. The same is true when it comes to Mobile App Development for reaching out to tech-savvy people. The prototype, as the name implies, gives a customer an idea about the application before the final design, ensuring a client’s important capital investment.

Changes in design might sometimes influence code in development. If the development of a prototype was not part of the process. Unfortunately, recoding an app during development can take more time and effort from your designers. As well as have a big influence on the development process, which can be expensive. Making changes in a prototype is easier and offers user input more quickly. Allowing you to concentrate on creating the app rather than worrying about rework due to post-production usability difficulties.

FEEDBACK IN THE RIGHT MANNER

The nicest aspect of using a Mobile App Prototype, the data from the whole app design process is shown. When the client sees the appearance and design of a working application. It will be more beneficial in developing a route that leads to a completely functional program.

To summarize, if you approach prototyping in this manner. It will collectively assist you in designing a final product that incorporates the client’s ideas. while also satisfying end-user expectations. Designers, Result Managers, and the customer are all involved from the start. To assist you in examining technical challenges and problems in more depth. And encouraging feedback and conversation to improve the eventual product. You can also go for Lytechx Digital Pvt Ltd, it’s the best web developing company in Jaipur. And you can also check other blogs like Influential ways to connect with your audience offline and online.