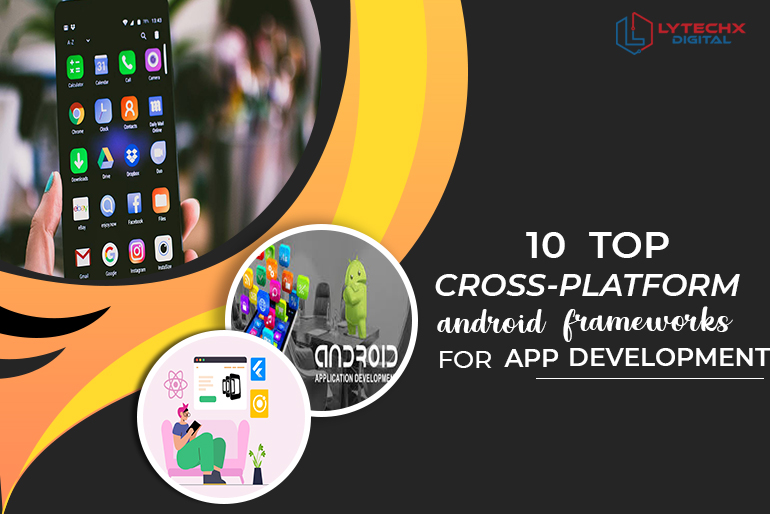 If you own a business, then this is just for you as a cross-platform helps a business to widen its public, target its audience better, reduce development cost, etc. You can easily make your app work effortlessly on any platform namely android, iOS, and windows just by typing out some codes only once. To type out these codes, you need to have a sound knowledge of coding languages like java, c++, and c which is very easy. Now, let us search for the Top 10 cross-platform android frameworks for app development.

Xamarin is a cross-app development framework created in the year 2011. It became more famous among developers and enterprises after Microsoft acquired it in the year 2016. Simply saying it is an open-source framework that helps in solving issues related to disjointed native technology stacks and reduces your Mobile Application Development cost and difficulty level. Xamarin’s community consists of over 60,000 contributors and is chosen by more than 3,700 companies. Moreover, you can send more than 75% of your codes across multiple platforms to work with ease.

React Native stands second on our list of top 10 cross-platform android frameworks for app development because of its highly responsive interface. It was created by Facebook in 2015 with the slogan informing that you can write it anywhere if you learn it once. This cross-platform Android framework became very popular within a few years of its release and also was trending on the top 5 for quite some time. 80% of its codebase can be shared across multiple platforms. Moreover, it also allows accessing some great native functions like operating a camera and accelerometer.

Flutter is one of the best open-source cross-platform Android development frameworks used to develop apps best suitable for mobile phones. This free platform is maintained by Google. Flutter also stands as one of the Best mobile application developers in the world. The best feature of this is that you can check where your coding went wrong within seconds. Besides spending your time and money in creating two separate apps for android and iOS, you can just Flutter, an object-oriented programming language, to create an app that runs on both with recognizable MVP development.

Previously known as Apache Cordova, PhoneGap is one of the most amazing open web tech used to create an app, sourced by Adobe. The programming languages it used are HTML5, CSS, and javascript and provide a wonderful cloud solution if you wish to create your app directly. You can also share your application created with Adobe PhoneGap with your friends to receive feedback. You can also connect to and access third-party tools and use several plugins while typing out codes. Wikipedia, TripCase, and FanReact are some of the famous apps created by PhoneGap.

If you love speed, you will definitely like Iconic. This app stands as one of the top 10 cross-platform android frameworks for app development. About 26,000 apps are created using this platform. It inherits a few features of android and iOS and allows you to design hybrid apps that run smoothly on both of them. The best feature of this is that it allows you to ship continuously and update your apps. It is used by over 5 million people across 200 counties. IBM, ING, SAP, and NASA were created using Iconic.

Onseen UI, created in the year 2013, is another coss platform framework used to make mobile app developments. It basically enables us to create a user interface with the help of HTML 5, CSS, and Javascript. It is open source in nature. Earlier, it was based on an Angular JSand supported jQuery but, after an update, it became a JavaScript framework-agnostic which means that developers can not freely create mobile applications using or not using a JavaScript framework. One of the other impressive features of Onseen UI is that it provides comprehensive tools and services while creating an app.

Created in the year 2004, Mono is a free and open-source framework and also stands among the top 10 cross-platform android frameworks for app development. Mono is a very popular framework and is used by millions of people across the globe. It is also a perfect place for a high-level programmer. You can conveniently design apps with a high-level programming language. A Mono runtime is also very helpful in scripting your application by putting it inside other applications.

Uno is just like the above-mentioned apps. It is a free and open-source framework for mobile app development. It is very easy to use and install. It is used to create apps for the past 6 years by millions of developers. The apps made with this platform run on Windows, Android, iOS, and WebAssembly without any errors. Uno is just the platform for you if you want to build the latest and user-friendly apps for mobile phones.

Meteor.js could be a development framework that has a particular feature of time period development. time period net is that the bunk for the big on-line firms in today’s times. Real-time net is that the hokum for the big on-line firms in today’s times. The info within the templates mechanically gets updated, as before long as changes to the info are created. With Meteor.js, the event method is extremely simplified with frontend, backend, and info all rolled into one language – JavaScript. Another good thing about this feature is that it works equally well for the client-side likewise because the server-side.

The .Net framework has been re-invented, and what was once restricted to Windows is currently formally transportable and runnable on near to any platform you wish. in line with the most recent StackOverflow survey, .Net Core is one of the foremost used frameworks, being the second server-side development framework once Node.js. And if you question me, the backend JavaScript hoopla can presently notice its limitation, ceasing the place to additional mature technologies, or niche new ones.

If you want to build an app, build it with the best. the above-mentioned frameworks are the top 10 cross-platform android frameworks for app development which will help you create and develop great apps. You can always look up to the Best web developers in Jaipur for more info.