Want to build apps like OLX and Offer Up in 2021? Here's how Top Web and Mobile App Development Company

Want to build apps like OLX and Offer Up in 2021? Here’s how 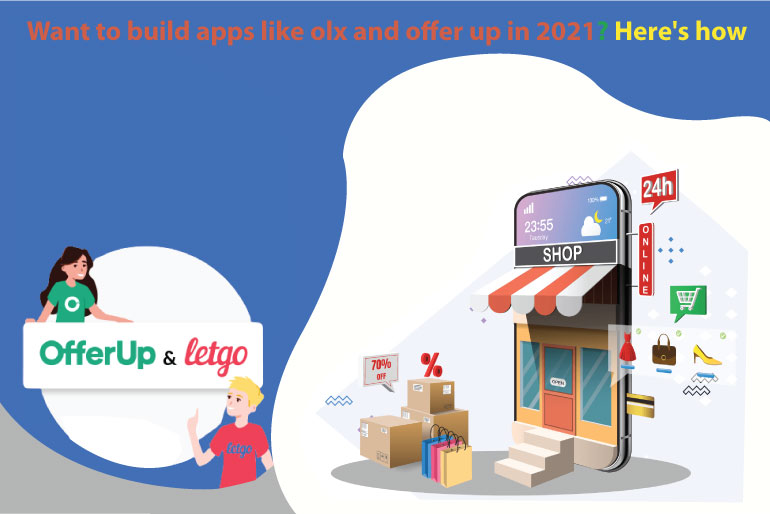 Nowadays there are too many things to understand, and are bombarding our minds. So, let’s break the monotonous arena and keep it simple. On this very topic let us first understand the basics. You can go for our services like Branding and Graphics.

What is the true meaning of Marketplace Application?

It is a website where clients can search for and purchase apps. Customers can download programs onto their computers, phones, or other devices. Added to this they can use the store as a central destination to utilize and administer cloud-based products and services. But also depending on the type of marketplace and items sold.

For a more clear view, an online platform that lists software programs for desktop computers and mobile devices is known as an app marketplace. It’s also not uncommon for desktop programs to have a mobile counterpart. Moreover, apps are often made for a particular operating system, such as iOS, macOS, Windows, or Android. This guarantees that consumers of all devices may access the same cutting-edge items.

I hope you don’t have any doubts regarding this anymore. Let us now talk about the other part of, building a marketplace app.

What Is the Best Way to Build A Marketplace App?

The following are the ten stages that best summarize how to create a marketplace app.

• Step 5: you should implement Basic and advanced functionality

• Step 6: Give your marketplace app a distinctive name

Now after all that you have known earlier. Still, you may have more confusion so we have provided an in-depth write-up for that. Major E-Commerce App Development Phases are there below. The stages of developing a buy and sell marketplace app are as follows:

• Have a clear idea of a monetization strategy
Commissions, subscriptions, listing fees, highlighted listings, and advertisements are the five primary monetization techniques. However, you can also use the hybrid option (a mix of two models).

• The ultimatum of Project Documentation and Prototyping
Prototyping makes it simple to see how the user will interact with the marketplace app. There’s a requirement for a  clear explanation of your product’s purpose for the production of a marketplace prototype. A technical specification comprises outlining the app’s objective, receiving feedback from end-users, and evaluating the marketplace app’s commercial prospects.

• User Interaction
Hence, Several criteria, such as the identified target audience and stated goals, are taken into account throughout the design outlining process. Thus the screens have been created to fit the concept.
A Minimum Viable Product (MVP) is used to introduce the first design (MVP). Added to this the marketplace app is now being tested. Thus feedback on to enhances the overall appearance and functioning of the product.

Hence, Buy and sell marketplace applications must, of course, be performance-driven, have a simple and intuitive UI and UX, and offer a comprehensive range of functions.

• Build A Marketplace App with This Tech Stack

The tech stack serves as a backbone for a marketplace app’s functionality. However, let’s talk about the tools and third-party services that an on-demand app development business may employ to create a marketplace app.

Node.js and Express.js for server-side programming.

JavaScript, HTML, CSS, and Bootstrap are examples of client-side development.

Moreover, you may have seen the above part and have a clear idea of how to build a marketplace app like OLX and Offer Up in 2021. You can also go for Lytechx Digital Pvt Ltd, its the best web development company in Jaipur. You can go for other blogs like Details on the new and Upcoming Features of IOS 15.