What is the difference between React and React Native? Top Web and Mobile App Development Company

What is the difference between React and React Native? 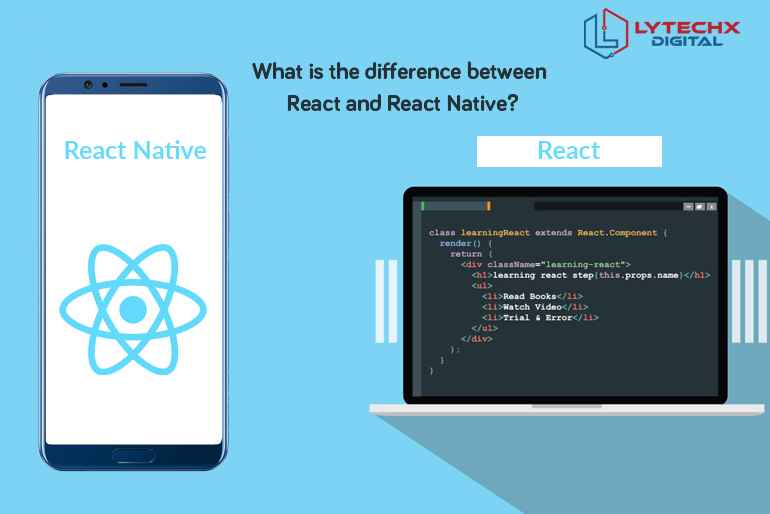 React and React Native Apps, both originate from a single family. These two apps are admired in the programming system. But these apps are different from each other both from the viewpoint of specifications and services offered by them. You can go for our services like the Software services.

Jordan Walke along with his team from Facebook created REACT. JS in 2011. But, only in 2013 REACT is exhibited to the commons and enable their usage. REACT. JS refers to a JavaScript Library, helps to build UI components for Web Application Interface.

In other words, it reuses materials and builds a strong framework. REACT .JS is broadly divided into two categories like; HTML Document and HTML Code. HTML Code helps to make the UI (USER INTERFACE), i.e., the top layer visible to the users. Frontend and Server-side both are equally important to REACT.

In 2013 REACT NATIVE was created by Facebook for Hackathon Project. But, only in 2015 did GIT HUB gained access to REACT NATIVE.

The word Native Apps creates an idea of inefficient, slow, and low productive apps. But REACT NATIVE will break your stereotypes with its responsiveness, high speed, high processor, and efficiency in developing the web. It is designated with the best user experience in hybrid space.

Hence, we can conclude that REACT NATIVE refers mainly to a mobile framework application. JavaScript supports it and works efficiently to make various applications for mobile phones. This includes platforms like Android, IOS, and Windows Phone. Here, you can use the efficient JavaScript of REACT to communicate with Native constitutes and to make reusable constitutes.

DIFFERENCE BETWEEN REACT OR REACT. JS AND REACT-NATIVE

Web apps are the main focus of REACT. On the other hand, REACT NATIVE helps to build mobile applications.

REACT takes help from DOM to generate code for a web browser. It uses a one-way data-binding system. This ensures that the parent component does not require changes due to changes in the child component. An update in the data model will solve the problem. While REACT NATIVE applies an API system to create code for mobile Apps.

The simple interface of REACT features qualities of, easy understand and use. For this reason, any developer with his basic knowledge can easily implement REACT’s JavaScript to create web Apps. But, REACT NATIVE’s interface is quite strenuous and only expert developers can handle it.

The security aspect is always best in REACT. But the security of REACT NATIVE is quite disappointing.

In REACT HTML the code is used to develop Apps. On the other hand, for rendering UI, Native uses JSX.

JavaScript Library of REACT. JS is unique in creating a dynamic, engaging, and high-performance UI Layer. But in the case of REACT NATIVE cross-platform features plays a key role. This practice makes it quite popular. Once the code is developed you can run that on various platforms. It includes Windows, Mac, Android, IOS, etc. Hence, it is best for mobile Apps with a truly native touch.

For incorporating styles REACTs use CSS unlike NATIVE ones, which use stylesheets.

Navigation is possible in REACT only when it uses REACT ROUTER. While REACT NATIVE supports inbuilt navigation.

People prefer the in-built animation of NATIVE rather than REACT where you have to take help from CSS.

The page loading time of Reacts application is fastest than any other. In addition, it is SEO friendly and enables quicker web page generation. While the highlight for REACT NATIVE is its community support. It involves the support of large teams to resolve your queries and questions.

Both, REACT and REACT NATIVE feature reusability, which as a result reduces the cost for production. As, in either case, the programmers do not need to create separate scripts for different purposes. Hence, it takes very little time for transforming the massive number of codes.

Hence you can conclude both REACT and NATIVE comes with different specifications but also share certain similarities. Hence, both apps are efficient in their way. One is best for web applications and the other one for mobile phones. Now, in this digital world phones and the web are equally important for maintaining our daily life. In addition to this, both devices and applications are in high demand. Therefore, it depends on your work and the required technology to choose among them. You can visit the page of Lytechx Digital Pvt Ltd, its the best web development company in Jaipur. And you can also go for, 5 NFT business ideas you can start today.