Which Is Better Hybrid VS Native Mobile App Development 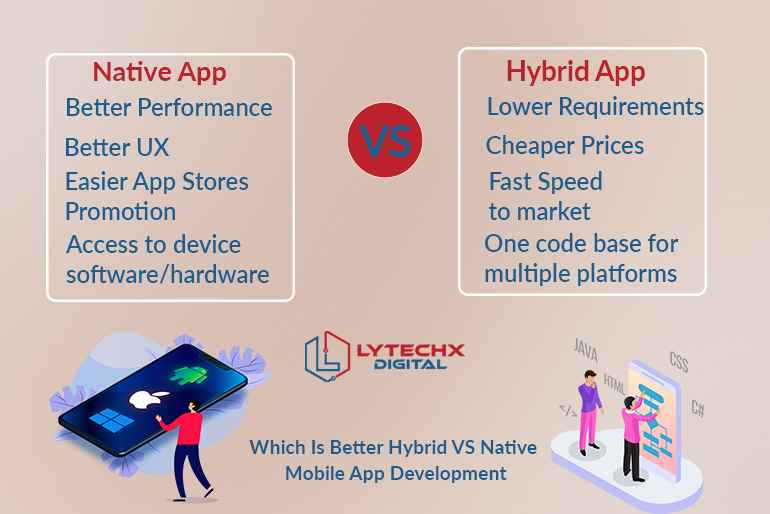 People often wonder whether a hybrid or native App is good for their application. Both Apps have their specialties and you need to choose which one is better as per the requirement of your application. You can also go for Digital Marketing and SEO services with Lytechx Digital Pvt. Ltd.

Native mobile app development means designing apps for a specific mobile operating system. It is easily available in google play stores or any app store. It uses the programming language of Objective-C for designing iOS applications and Java or Kotlin for Android.

A native app refers to an application developed especially for smartphones keeping in mind the guidelines of the OS. Its appearance is consistent, works faster, and easy to use the app. The native app offers users to access its inbuilt features such as GPS, address, camera, and book.

Native app development enables an app to be designed and optimized for a particular platform. Being built for a specific platform with a specialized coding language, Native App exhibits high-level performance, is quite responsive, efficient, loads data at a faster rate, and has high working speed.

However, the initial cost for installing the Native App is quite high. There are also few functional shortcomings of Native App along with its complex maintenance criteria.

The hybrid apps are created with the help of web technologies such as JavaScript, HTML. Hybrid apps are websites that are usually put into a native app. Hybrid app Cross-platform capability and can only use one database to cover multiple platforms and like other native applications, it can be distributed through official markets like apps Google Play and Apple Store.

Here are some advantages of hybrid app

However, there are some drawbacks of Hybrid apps.

You can also look for the best website services in the top website management in Jaipur, Lytechx Digital Pvt. Ltd. You can also check out some other blogs like procedure to built and launch the white label NFT marketplace development.