Why Flutter is setting trend in Mobile Apps Development in 2022? 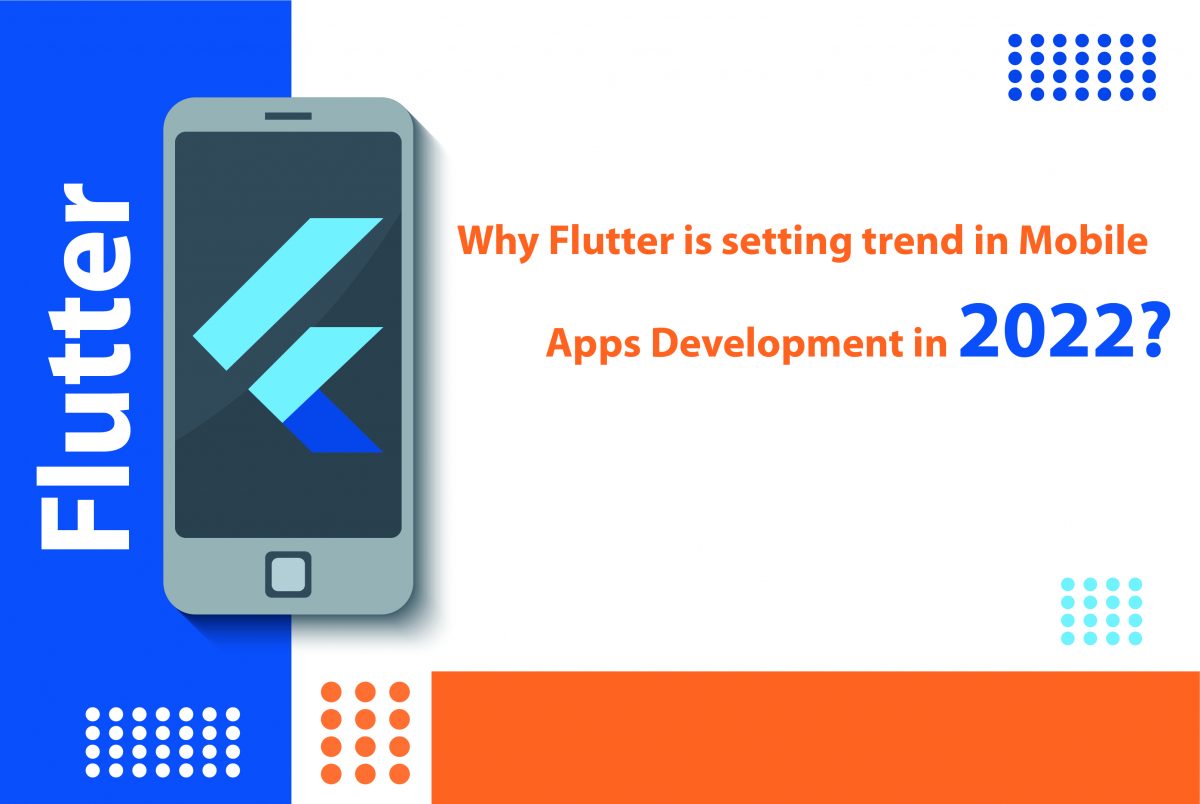 Google offers Flutter, an open-source platform for using the codebase to develop native applications for iOS and Android. The module site is a complete Software Development Kit (SDK) that contains everything you need to develop mobile applications across platforms. Includes command-line tools, machine rendering, test and integration APIs, and custom widgets. You can also go for Mobile Applications.

Flutter follows a reactive development architecture, in which user interface elements are automatically modified when variables change. React Native accepts this concept but requires a JavaScript bridge to control OEM widgets. This can lead to performance issues that Flutter reduces by completely removing this bridge and integrating it into the application.
It is an object-oriented language that can use to compile native code without the need for additional bridges. This helps speed up the application startup time on a large scale.

The best features of Flutter :-

After discussing what Flutter is, you may want to know the features. Here are some exciting features of Flutter:

Flutter has a hot reload, a powerful tool to help you get more widgets and you can work in a dynamic interface.
• Allows developers to build applications for large platforms, such as iOS and Android, using only one codebase.

• It has a command called Flutter Doctor that allows you to quickly fix bugs so developers can fix them as soon as possible.

• The structure is very flexible because it provides a library of widgets used by application developers.

• It has RAM code, which makes it ideal for technology companies and start-ups.

• It has a good user interface for GPU rendering, which is very much needed when developing mobile applications enriched with graphic designs.

Why did Flutter set a new growth trend in 2022?

1. Impressive and own designs

Whether you are an emerging agency that needs MVP or just the one you need to show potential investors, you can count on flutter as a framework. It follows an MVP strategy that requires limited time and effort and nominal flutter application development costs.

3. Keep Google as your backbone

Flutter is Google’s unique SDK for creating detailed native compiled applications that work for desktops, the web, and mobile technologies from a single code. Google is committed to providing an improved user experience through Flutter. Google is also committed to creating a technology that is happily accepted by both organizations and developers.

4. One code base for all platforms

As a multi-platform tool, the flutter SDK allows developers to build applications for the web, mobile, and computers with a single code. The technology implements everything on its own supporting mobile platforms iOS and Android.

5. Same user interface and business strategies on all platforms

Flutter fixed typical UI patterns in reusable widgets. This reduces the need to configure UI features such as style, colors, etc. The UI and business logic can be changed worldwide by editing the code for flutter for Android and iOS.

Developers do not need much testing to use flutter to develop mobile applications. This is because you only have to write automated tests once. After all, there is only one base of code. Because testing can be faster, marketing time is automatically come to waste.

Flutter SDK-based applications outperform. They work smoothly and very quickly, without winding between cutting and rolling.

Flutter eliminates deployment time enormously. You can apply all changes immediately without losing the current application. You can also improve the user interface, fix bugs, and add features without compromising application speed and performance.

9. Similar to the features of the native application

Flutter applications are written in Dart, which minimizes the JavaScript Bridge, and are compiled with native machine code. This will allow you to compile and run the application much faster than you can do with React Native, for example.

10. Hot Reload for collaboration between developer and designer

Flutter’s hot-load feature is especially useful for developers and designers. As soon as the developer needed some changes to the user interface, the designer did so and both saw the changes immediately in the middle of application development.

You can run flutter on any existing platform that works well without having to change Dart code and maintain multiple platforms on platforms. Flutter development is already evolving from mobile devices, bringing new desktop and web capabilities that are already in active use.

12. Upheld by VS Code and Android Studio

In numerous IDEs you can find the Ripples. The 2 fundamental code editors are VS Code and Android Studio.

Flutter’s transparent and clear documentation makes it a viable choice among a large community of developers across platforms. Flutter is sleek and smart and requires no extra effort from developers to learn the language.

To create a user experience, flutter combines to create online changes and user experiences. Users also create widgets according to their needs and can also save them for the future.
load the arrow plug-in and start integration. VS Code is a lightweight tool where you can configure everything through a branded plug-in. You can also go for Lytechx Digital Pvt Ltd, its the best web developing company in Jaipur. You can also check other blogs like Procedure to Create a fitness app of your own Efficiently.