The Gradual Impact of Covid-19 on the App Development Industry 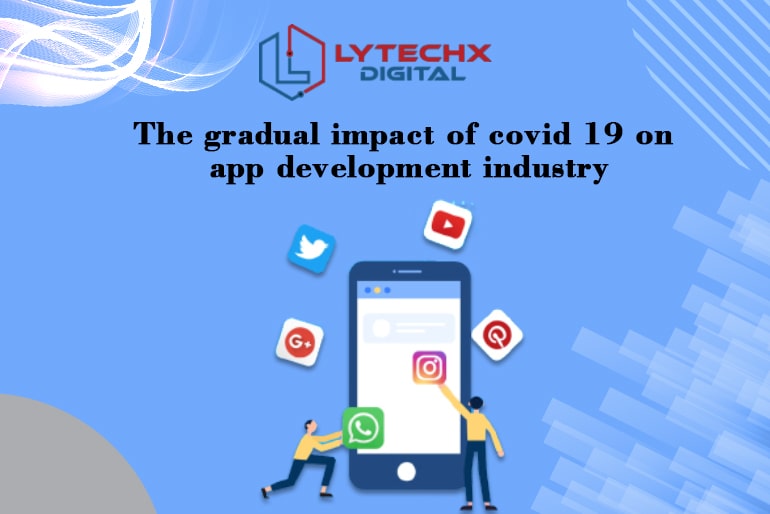 In recent times the one thing that is haunting us is the worry about our health. And this is due to the covid-19 pandemic which has caused severe pressure and tension among people all over the world. Life after this pandemic has changed a lot and we have also witnessed a severity among the deaths. So, in this situation, many things have been changed such as one of the severe changes that have occurred in the Mobile App development industries. The following are some of these changes:

The definite rise of mobile applications

While the pandemic rising to an uncountable extent people are often spending their time indoors. And spending more amount of time on their phones, and they are also not engaging themselves in any attentive activities so distractions through phones are quite available.  According to the survey, during the lockdown period, the use of mobile devices went up from 6.1hours a day to 7.3 hours a day. So, few apps detected the Covid-19 patients based on their locations and have helped to fight against the virus constructively. So, to conclude:

The epic falls off demand for the travel apps

Due to this severe condition of the virus, it was requested that people stay at home. And it affected all the countries but the severity may vary. So, traveling in this condition can be impossible to think and act accordingly. And has been noted by few specialists that these travel apps have been severely devastated and for them to get back is often very difficult. So, after this pandemic, the rebuilt of these applications has been planned but it can be a too long procedure as due to the current situation it is quite impossible. Hence to conclude:

A bad effect on the shopping apps

This pandemic has imposed all of us into our homes so moving out for shopping has already been a difficult task nowadays. And so, it has given a severe impact on shopping apps. There is an option for online shopping but it can give rise to the big question on the safety measure so shoppers have usually ignored this idea. And this pandemic has also affected the fashion and glamorous world so there are no such doubts about ordering dresses and items of such things. So, these app development industries have faced a gradual sub-down over their businesses. Hence to conclude:

This pandemic has affected a large number of people, especially the food delivery apps, they have faced a huge problem as this has a very important relationship with the safety of the people and so there were no such matters on the orders. So, the decline in the orders of the FMCG applications has been felt by a whole lot of suppliers. Even the delivery persons have faced a lot of financial crisis due to this matter. Hence to conclude:

An amazing upsurge in the social networking apps

Lockdown had created a feeling of isolation among the people and on this note, they have gathered a lot of time to spend on their Family members. But connecting to an extended one the only solution was that to be connected on the social media platforms. And as was expected a gradual increase in the ranks of the social media platforms. The usage of various media applications was performed along with that the gaming apps were equally demanded and it has actually helped people to be engaged and still find a ray of hope in the extreme boredoms. So, to conclude:

Educational apps are on the rise

In this difficult situation, there was a rise in the usage of educational applications as this pandemic has forced to shut down all the educational institutions. So, students were to attend classes online with the help of many applications. So, in extreme conditions also education may not go in vain as it is defined as the future of society. So, the process was going on with the few assignments and classes on different applications. Hence to conclude:

Business-related applications are so the top

Due to the pandemic situations, there are a lot of industries that have shut down due to this occurrence. Thus, all the meetings and conferences are all being performed online. So, few applications have contributed to this upsurge, to conduct meetings and organize the work scheduled. To connect with the people out there as well as to perform the activities online. There are a lot of business platforms in this country so hence it is quite obvious to get such huge demand for the applications. Hence to conclude:

Health care apps are on a super victory

This pandemic has made a huge demand on the health care facilities so the applications based on that had a huge demand to the common people. Especially ordering medicines that are unavailable to a particular area that has been ordered online. And the performances they have shown were also very impressive as they have made a huge and fast delivery to the emergencies. Hence to conclude:

Thus, these were the few effects on the app development companies in this emergency. Moreover, you can also look for Lytechx Digital Pvt.Ltd, the best web developer company in Jaipur. You may also visit the Top 10 cross-platform android Frameworks for App Development.